Advertising: Why the UK?

By many global measures, the UK has one of the top-performing advertising sectors. UK adspend rose 4.2 per cent year-on-year to reach ¬£6bn in Q1 2019, marking the 23rd consecutive quarter of market growth. According to the Advertising Association/WARC Expenditure Report, the preliminary estimate for 2019 adspend is ¬£24.6bn ‚Äì meaning the industry will have grown 4.6 per cent year-on-year.(i)

Reflecting the success of advertising agencies such as adam&eveDDB and AMV BBDO, the UK is the number two country after the US for winning creative advertising awards.(iii).

The UK is also home to media agency networks of global scale and sophistication, such as MediaCom and PHD, and internationally acclaimed production companies such as Rattling Stick. The industry draws from a well-educated and diverse pool of talent. More than 60 per cent of the advertising and marketing industry's workforce is educated to at least degree level. The UK is a magnet for international talent, with about 12 per cent of employees born outside the UK. (ii)

2. Expertise in exports and Global Branding

According to a 2019 Advertising Association report, the UK ad industry exports ¬£6.9 billion, an increase of 18 per cent on the figures for 2016. It also has the largest trade surplus in advertising services across Europe. In recent years, UK agencies have helped create effective global branding for the likes of HSBC, Samsung, Virgin Airlines, Hilton Hotels, Audi, Emirates, AUDI, Huawei, and Air New Zealand.

3. a blend of creativity and effectiveness

The culture of UK advertising assigns a high value to delivering effectiveness through creativity. The country is home to the advertising world's most rigorous effectiveness competition - the IPA Effectiveness Awards - and has a tradition of developing qualifications and training to encourage knowledge about effectiveness to be shared and put into practice. When the Cannes Lions International Advertising Festival introduced an award for creative effectiveness, the UK provided the winner twice in the first three years of the prize.

4.  At the forefront of technology & innovation

Competition between UK agencies to win and retain client business has shaped expectations that they must innovate in an ever-changing market. This is clearly evident in digital communications, where the UK has the largest online ad marketplace in Europe. In mid 2018, the total UK digital advertising market was estimated to be worth ¬£6.4bn, up 15 per cent year-on-year (iv). The UK is the continent's centre of mobile and app development, and a rapidly expanding hub for programmatic media trading and technologies such as virtual reality, the Internet of Things and artificial intelligence. (vi, vii) The UK Government has also published a strategy to make the UK the best place in the world to start and grow a digital business. (viii) 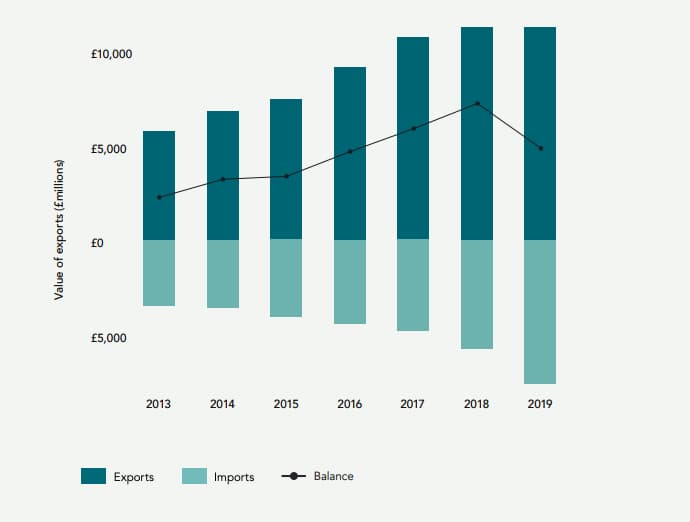 UK advertising and market research exports grew 7 per cent to £11bn in 2019.

Transforming Aldi UK over a decade

An award-winning case study of the successful advertising strategy adopted in the UK by the discount supermarket, Aldi.